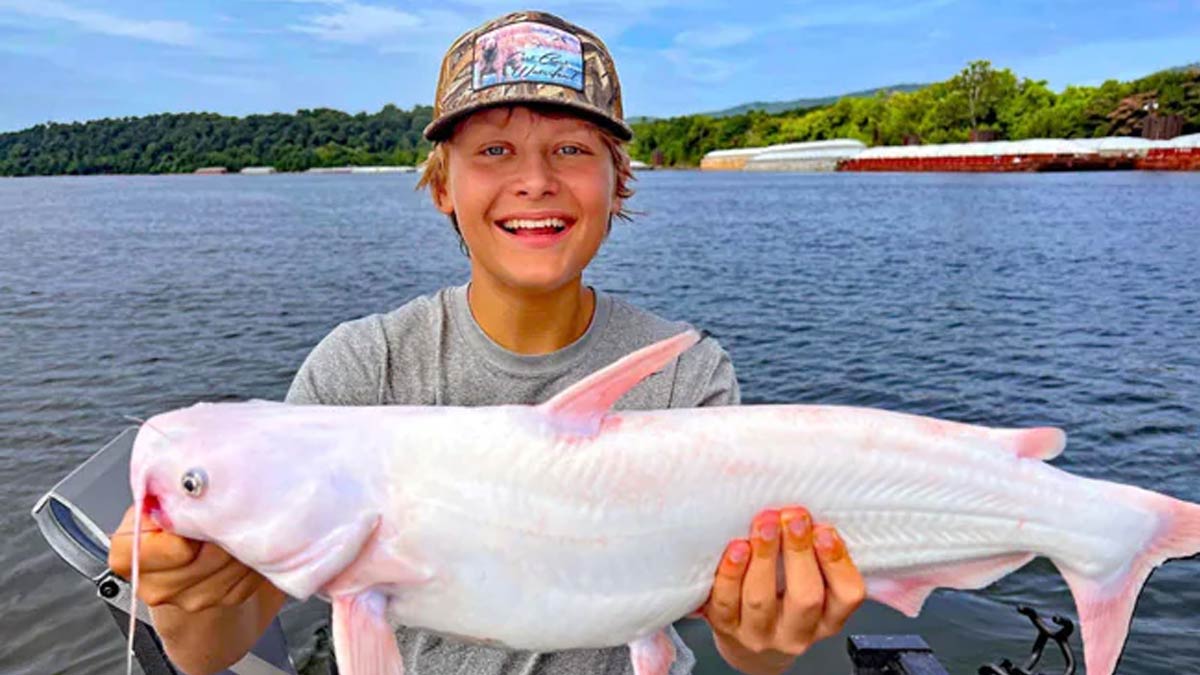 A 15-year-old boy catches a “extremely rare” all-white catfish in the United States:
A 15 Years old boy in the United States recently caught a rare white catfish. Tennessee Wildlife Resource Agency (TWRA) reported that Edwards Tarumianz caught the unusual fish while on a fishing trip led by Richards Simms of Scenic City Fishing Charters on June 28. The fish belongs to the species Lctalurus Furcatus, also known as blue catfish. The Species are usually blue, but the specimen caught by Edward was mostly white with some light pink spots on the fins.
Richard Simms told Newsweek that the fish was extremely rare. He also said “Most anglers fish their entire lives and never see one. I am 67 years old, have boated tens of thousands of catfish over the years and it was the first I’d ever seen in person,” Furthermore he also stated that the fishing was so unusual that people would have found it difficult to believe if they hadn’t seen a picture of the fish.

The captain believes the fish was a leucistic catfish

The fish might have been a leucistic catfish that affect many animals and that is described by overall pale colors, or areas or reduced coloring, the captain claims. There is also a chance that the fish is Albino. Albinism is a genetic condition characterized by a lack of melanin.
A TWRA Spokesperson said “Regardless, we all agree that it is a great and rare catch,”
The fish was released back into the water after A 15-year-old boy catches a extremely rare all-white catfish.

Internet users praised the boy for his exceptional catch

“He will be a fisherman for the rest of his life and what a fishing tale he will have! Congrats young man!” One user wrote. Another one said “What a special memory for that young man! He will never forget that day for sure! Happy he caught it as no one would ever believe him with a “The One that got Away” story about a fish that looks like with of those!” “WOW! What a beautiful fish. Congratulations!” wrote the third user.