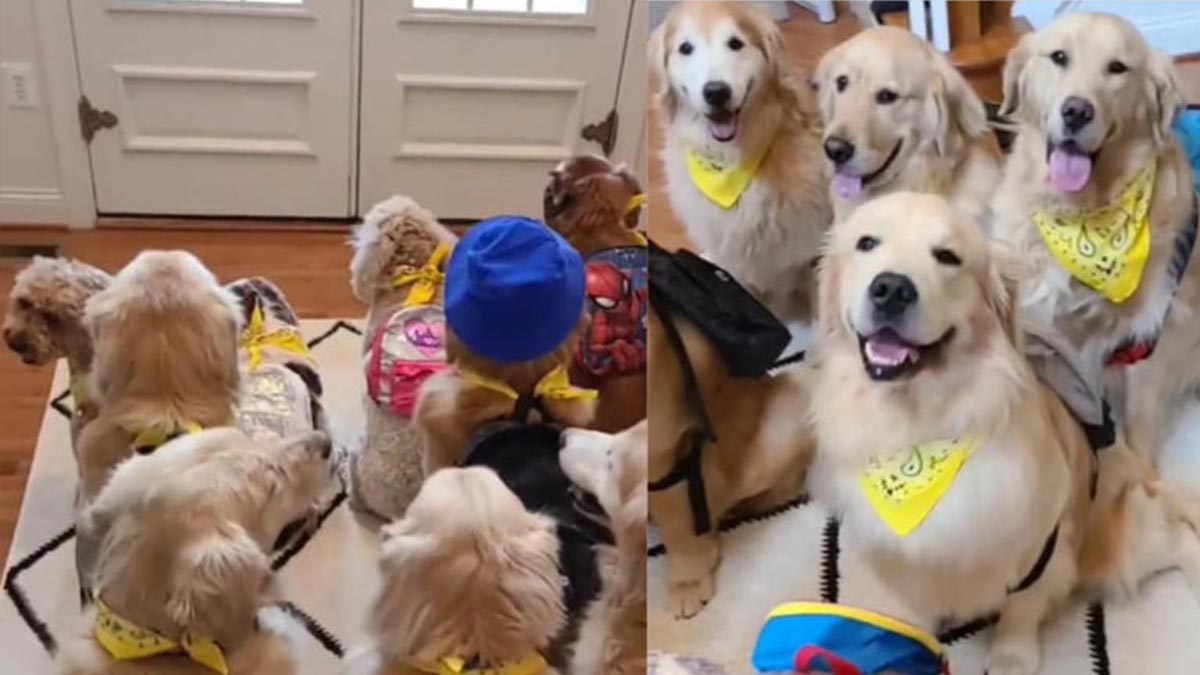 Adorable Video of Dogs Waiting for the School Bus

Makes You Smile: Adorable Video of Dogs Waiting for the School Bus : The Internet is brimming with lovely and humorous dog videos that make people laugh out loud. A video that has gone viral shows a group of canines calmly waiting for their school bus. What makes it even cuter is how their owner dressed them up for the occasion. Dogs are shown wearing anything from little backpacks to bucket caps as they sit calmly together.

Adorable Video of Dogs Waiting for the School Bus

As the camera captures them together, they gather in the corridor of their house and sit on the carpet. They all have yellow bandannas knotted around their necks and little backpacks on their backs “Waiting for the school bus I hope the kids have a great year,” the dog family’s owner stated while posting the video online.

As soon as the Video Became Viral, It Drew Huge Attention from Dog Lovers All Over the World

When the video went viral, it drew huge attention from dog lovers all over the world. “Omg. I’m in love with every single one of them! Just so precious!” one user said. Omg! This is the cutest thing I’ve ever seen! Adogable!” wrote another. Meanwhile, netizens asked the dog owner to offer behind a scene look at the pups preparing for the video.

“The bucket hat kills me every time! We need a behind-the-scenes video of you getting them ready!” one user commented. “Where can I sign up for this camp?” inquired another.

Video Had Over 67,000 Likes On the Photo-Sharing App

Victoria Diange West, an Instagram user, provided the footage of the dog family. Within a few weeks, the video had over 67,000 likes on the photo-sharing app. The devoted dog owner dresses up her canines for special events such as Christmas and date evenings. Her Instagram account is loaded with adorable videos and pictures of her feline friends that will make you smile.