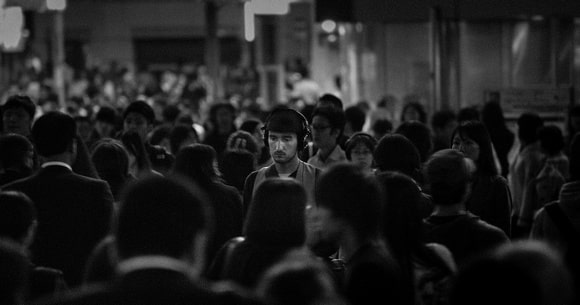 And that’s about it, no more questions.

Sometimes, good morning or good afternoon might take their place, but that’s not the point is it.

No one thinks about talking “The Talk”. We don’t ask them, if they meant it, when they said, “I’m Fine”.

People don’t ask twice. But here is why they should.

Why should you ask Twice? Well, you shouldn’t. It isn’t about asking them what’s wrong, and at the same time, it is.

People who are suffering from bad mental health feel that it has something to hide because people might treat them differently. Even worse people might think they are seeking attention. Plus, it isn’t that easy to talk about it.

And we don’t have to force them or ask them to talk about it. At times it can be like pushing on a fresh wound.

Saying “I’m fine” or “I’m alright” can be a way of not disturbing the ghost which haunts them, leaving it be. Maybe, it’s their way of dealing with it. We don’t have to make them feel it again or feel bad because of it.

This is why, it’s not about asking TWICE, it’s about making them feel less alone, letting them know, that there is someone who cares about them. It’s all about making your friend, buddy, coworker, classmate, feel “seen”.

Let’s see, how to say “Are You Sure?”, and allowing them to talk if they aren’t (without pushing them too much).

Because the person suffering from it doesn’t usually come out that easily. Despite their face, telling the whole story.

So, here are five to ask twice, without making it awkward for either of you.

Not too push but enough to show how much you care, a simple “Are You Sure?”.It will allow the other person to open up, if they want to, or just reply with a sweet,” yeah I am alright” if they are doing just fine.

This is a good way to let other people know, that you care to know how they are doing, rather than just brushing them off, like how everyone else does.

Telling them, that you are there for them, a good response to “I’m Fine”.You are letting your buddy know, that you are aware of their condition even if just a little bit, and you are ready to hear them out.

And at the same time, it’s not too pushy. Allowing them to take their time, and go on at their place.

Yeah, I know this is one of those boring questions, but hear me out. Asking “how’s the work going?”, “How did the weekend go?”, or something else along those lines, let them know you are interested in their life, without interfering too much.

If this makes them feel like talking about it, good. If not, it’s still a good way of telling them, they aren’t “alone”, which is quite something.

The show, the game, or just anything. It’s not about whether they watched it or not, it’s about talking about mutual interest.

Have you ever noticed how people’s eyes light up when they find out you love the same thing you do? Yeah, it’s about that. Because, sometimes it’s better to steer away from problems, and share a laugh with a friend or a co-worker.

We don’t need to remind them, they are done, or keep trying to go it out. Making them laugh is one better way of making them feel less alone.

“yeah? I’m not doing too good myself lately” or “things aren’t going good for me either” is how you tell them, it’s okay to not be okay.

Everyone has a problem, and they aren’t any less of a person due to their mental health. It shows them it’s okay to talk about what worries us. That you are opening up to them, and they can open up to you too.

It’s in a way, trade of… say, support. Letting them know, they are like everyone, and more importantly, it’s okay to talk about it, is priceless.

A lot of people leave them a house, hoping someone would ask them, are they really fine? Something is stopping them from reaching out for help. Call it a monster, call it a fear, it is there. If you, me, or anyone else can make them feel a bit better, it’s worth more than anything. And if you can do it just through a simple question, or a line, wouldn’t that be amazing?